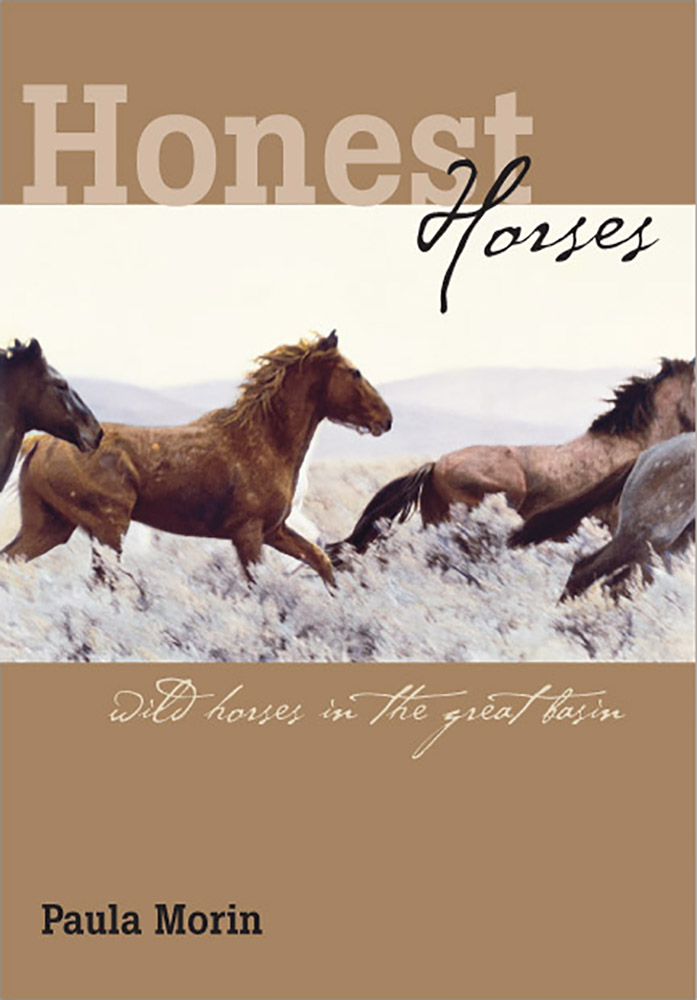 Horses have been part of the American West since the first Spanish explorers brought their European-bred steeds onto the new continent. Soon thereafter, some of these animals, lost or abandoned by their owners or captured by indigenous peoples, became the foundation of the great herds of mustangs (from the Spanish mesteño, stray) that still roam the West. These feral horses are inextricably intertwined with the culture, economy, and mythology of the West. The current situation of the mustangs as vigorous competitors for the scanty resources of the West’s drought-parched rangelands has put them at the center of passionate controversies about their purpose, place, and future on the open range. Photographer/oral historian Paula Morin has interviewed sixty-two people who know these horses best: ranchers, horse breeders and trainers, Native Americans, veterinarians, wild horse advocates, mustangers, range scientists, cowboy poets, western historians, wildlife experts, animal behaviorists, and agents of the federal Bureau of Land Management. The result is the most comprehensive, impartial examination yet of the history and impact of wild mustangs in the Great Basin. Morin elicits from her interviewees a range of expertise, insight, and candid opinion about the nature of horses, ranching, and the western environment. Honest Horses brings us the voices of authentic westerners, people who live intimately with horses and the land, who share their experiences and love of the mustangs, and who understand how precariously all life exists in Great Basin.

Paula Morin is a photographer, artist, and oral historian who for over ten years has immersed herself in the world of wild horses by reading about their evolution, behavior and development; observing and photographing them in their natural surroundings; and speaking candidly with individuals most deeply knowledgeable about them. With endorsement from the Nevada Arts Council, Paula was awarded a Rural Community Arts Assistance Grant from the National Endowment for the Arts and the U.S. Forest Service in 1999 to explore the significance, meaning and impact of wild horses in the remote high desert. The results of her two-year creative inquiry were arranged in the critically acclaimed national touring art exhibit, Honest Horses: A Portrait of the Mustang in Nevada’s Great Basin and subsequently developed as an interdisciplinary learning component for the Nevada Touring Initiative. Raised in San Francisco, Morin graduated from Notre Dame des Victoires high school in 1962. She inherited an instinctive admiration for the horse from her father, a CBS radio broadcasting executive of French-Canadian descent. After graduating magma cum laude in art from Southern Oregon University, she pursued post-graduate work in art history and cultural anthropology at University of Arizona and Oregon State University, but eventually excused herself from academia by settling into life as a freelance photographer and field researcher. In 1992, Morin began fusing her appreciation for the cultural landscape of the American West with her affection for horses and the tradition of horsemanship alongside her accomplishments in the 19th century technique of handpainted black & white photography. Morin’s original handpainted photographic images are included in several permanent collections, including the Buffalo Bill Historical Center in Wyoming, the Nevada Museum of Art in Reno, and the Martin of Tours Collection of Northwest Art at Saint Martin’s College in Washington. A selection of giclee prints from the Honest Horses exhibit are also available as limited edition prints. Morin currently resides in Montana. Read more about her on her website.

"The firsthand knowledge of the lives of wild horses and the pressures on their environment that Morin has gathered creates an excellent and essential primer on the need for truly aiding wild horses, not just making humans feel better." —Colleen Mondor, Booklist, 1 March 2006

The candid opinions expressed in this book make it truly deserving of the Western genre, and the work deserves a prominent place on every horse lover's bookshelf." —Meghan Saar, True West, September 2006

"For this reviewer, the best parts were the treatises on Great Basin ecology and natural history, and the stories of wild horse hunting and mustanging in the old days....This is a worthwhile book, which, hopefully, will stimulate thought and dialog followed by steps to solve the problems described." —Patrick Hearty, Utah Historical Quarterly 74.3, Summer 2006

"This is a thoughtful book, and these narratives are fascinating precisely because they are not sugar-coated or romanticized."—Art Horse Magazine, Summer 2006

"Vivid and enthralling accounts of the pleasures and sorrows of a lifetime spent in horsemanship." - New Mexico Historical Review

"It is practical, unembellished, and truthful...this printed mosaic of Morin's may well be a cornerstone in the foundation of understanding needed to provide an answer to the question of balance and the wild horses in the Great Basin." - I.M. Cowgirl