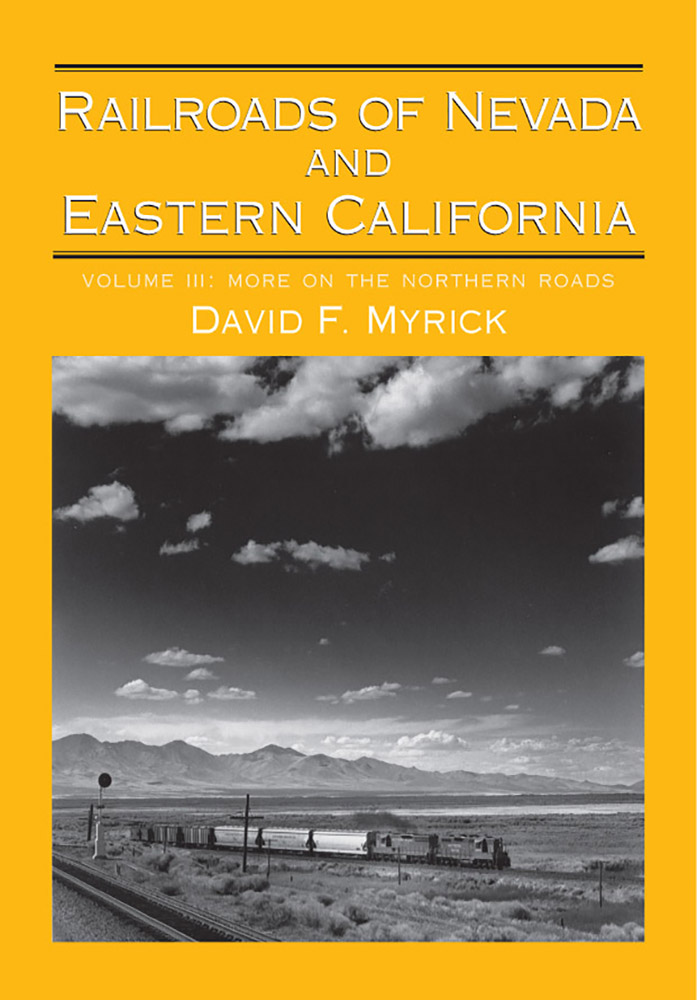 Railroads of Nevada and Eastern California
Volume 3: More on the Northern Roads
$75.00

Valuable as these volumes are in relation to railroad operations in Nevada and California, their usefulness as authoritative reference sources embraces a much broader scope. Railroads of Nevada and Eastern California is as much a history of the region as it is a study of the railroads. The principal mines and mills and their production are scrupulously detailed, together with the personalities who created them.

The final volume in the complete history of Nevada and Eastern California railroads David Myrick's monumental railroad histories have become essential reference works for railroaders, historians, and hobbyists. Volume III contains additional information about the northern roads, including some not covered in previous volumes, and about developments since the publication of the first two volumes in the railroads of the region. It provides new facts gleaned from the correspondence of Collis P. Huntington, one of the builders of the Central Pacific and Southern Pacific railroads. It also covers roads connected with the lumber industry and the construction of electric power plants, and Southern Pacific branch lines, including some that never advanced beyond surveys.

Author Bio
David F. Myrick (1918-2011) was the author of several books about western history and western railroads, including the three volumes of Railroads of Nevada and Eastern California. He lived and wrote primarily in Santa Barbara, California.
Reviews
“This is an admirable regional history of the last 150 years of regional growth with a sharp focus on the chief engine of that growth—the trains. Deeply, lovingly researched, Myrick’s will stand as the definitive history.” —Reference & Research Book News
“An absolute must for anyone interested in Western history, written with wit and pizazz, and presented with real skill.” —The Coast Book Review
"It's a fascinating, comprehensive coffee table-sized publication, even for non-railroad buffs." —Herald and News
© University of Nevada Press
Design by BDG