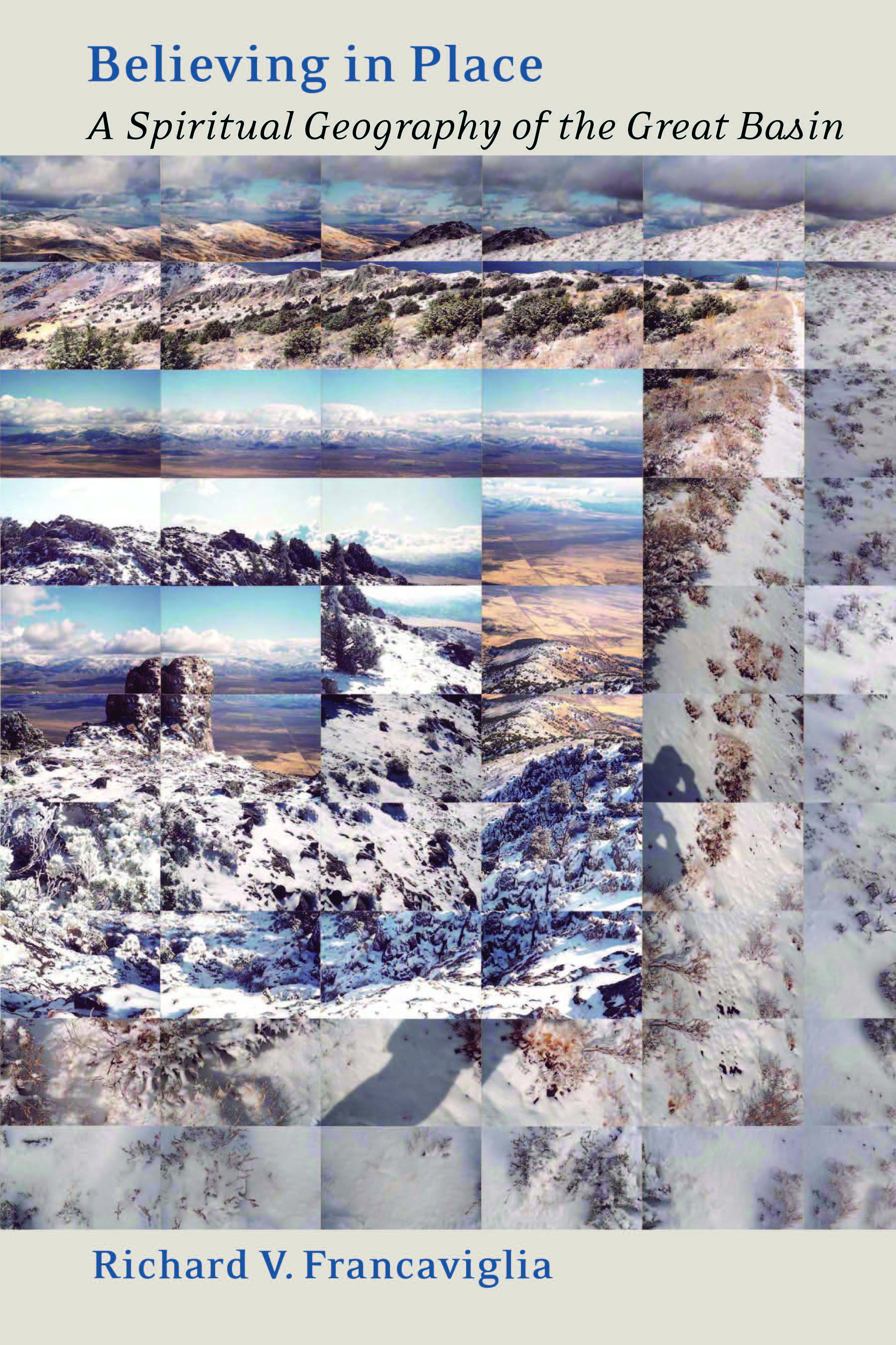 Believing In Place
A Spiritual Geography Of The Great Basin
$29.95

The austere landscape of the Great Basin has inspired diverse responses from the people who have moved through or settled in it. Author Richard V. Francaviglia is interested in the connection between environment and spirituality in the Great Basin, for here, he says, "faith and landscape conspire to resurrect old myths and create new ones." As a geographer, Francaviglia knows that place means more than physical space. Human perceptions and interpretations are what give place its meaning. In Believing in Place, he examines the varying human perceptions of and relationships with the Great Basin landscape, from the region's Native American groups to contemporary tourists and politicians, to determine the spiritual issues that have shaped our connections with this place. In doing so, he considers the creation and flood myths of several cultures, the impact of the Judeo-Christian tradition and individualism, Native American animism and shamanist traditions, the Mormon landscape, the spiritual dimensions of gambling, the religious foundations of Cold War ideology, stories of UFOs and alien presence, and the convergence of science and spirituality.

Believing in Place is a profound and totally engaging reflection on the ways that human needs and spiritual traditions can shape our perceptions of the land. That the Great Basin has inspired such a complex variety of responses is partly due to its enigmatic vastness and isolation, partly to the remarkable range of peoples who have found themselves in the region. Using not only the materials of traditional geography but folklore, anthropology, Native American and Euro-American religion, contemporary politics, and New Age philosophies, Francaviglia has produced a fascinating and timely investigation of the role of human conceptions of place in that space we call the Great Basin.

Richard V. Francaviglia is professor of history and geography and director of the Center for Greater Southwestern Studies and the History of Cartography at the University of Texas in Arlington. As both historian and geographer, he is especially interested in the way places change through time, and how that change is depicted in maps, literature, art, and popular culture. His administrative interests include working with university faculty and staff to develop proposals, and to secure outside funding, for innovative educational programs.

Francaviglia received his A.A. from Foothill College, Los Altos Hills, California with highest honors (1965), B.A. from University of California at Riverside with high honors (1967), and M.A. and Ph.D. (1970) from the University of Oregon (Geography major, Art History minor). He taught at the University of Minnesota, Antioch College, University of Arizona, and Wittenberg University, and is currently a Professor of History and Geography at the University of Texas at Arlington. He teaches courses in historical geography, the history of cartography, environmental history, geography of the West, historical methods, public history, history and film, and natural history images and scientific illustration. His research interests Include the role of maps and natural history illustrations in the history of discoveries; the ways in which environments are shaped by individuals, corporations, and religious groups; mining and transportation history; cartographic history; the history of geology, geomorphology, and mineralogy.

"The Great Basin encompasses the vast deserts and mountains of Utah and Nevada and a complex overlay of faiths. Historical geographer Francaviglia has been traversing and contemplating this austere, mysterious, and majestic land for four decades and creates a palimpsest similar to George Johnson's portrait of New Mexico, Fire in the Mind (1995), as he illuminates the interplay between landscape and the imagination. Fluently scientific yet open to other modes of perception, he parses the region's natural history in connection with Native American spirituality, Mormon beliefs and culture, and the apocalyptic presence of nuclear weapons, which dramatize as nothing ever has before the cosmic dance between creation and destruction. Plain spoken yet eloquent, Francaviglia is at once awed by, for example, the startling phenomenon known as dust devils, conversant in their physical dynamics, attuned to their mystical aspects, and intrigued by the implications of their name, which is part of the desert's remarkably religious lexicon. An exceptionally illuminating travelogue, Francaviglia's many-faceted inquiry reveals the genius loci of a unique and powerful place." —Booklist

"The Great Basin may be one of the most underappreciated U.S. regions, but Francaviglia fills in what might appear 'blank' or 'desolate' to that traveler encountering it for the first time. Believing in Place has much to offer anyone interested in the processes by which place and belief commingle so as to inspire thoughts of the divine." —ISLE

"Richard V. Francaviglia has given us a nuanced and multidisciplinary reading of landscape as religious text, and situates the Great Basin within the larger history of human spirituality. Believing in Place is not only an important addition to the literature of the region, but an essential study in how we construct intimate place out of the great space of the American West." —William L. Fox, author of Playa Works: The Myth of the Empty

"Believing in Place crafts interlinked and evolving rings of narrative: descriptions of the physical setting of the Great Basin's lacustrine past, inquiries into its semi-arid present and the nuclear landscapes of mind and images, and extends even to a quizzical embrace of the splashes of neon and assertive Las Vegas cosmopolitanism that are manifest in the region's twenty-first century life. The mix of musings on the theme of place are as complex as a vintage Port, and the flavors no less savory." —Paul F. Starrs, professor of geography at the University of Nevada, Reno, and author of Let the Cowboy Ride

"In an era when spiritual concerns ranging from evangelical environmentalism to New Age revelations increasingly make their presence felt throughout society, Francaviglia's inquiry contributes to our understanding of how such concerns have shaped human perceptions and actions in the Great Basin and how they may influence other such encounters in other places. Its array of intriguing questions and answers deserves the thoughtful attention of many scholars." —H-Net Reviews

"Francaviglia demonstrates that a single place may have a multiplicity of narratives, including competing narratives about a place's inherent spiritual meaning. The book is also a passionately written pilgrimage of self-reflection, reminiscent of Robert Pirsig's Zen and the Art of Motorcycle Maintenance. Francaviglia thus fuses his personal experiences and contemplations of spirituality and place to create a broader personal narrative about the Great Basin." —Journal of Historical Geography