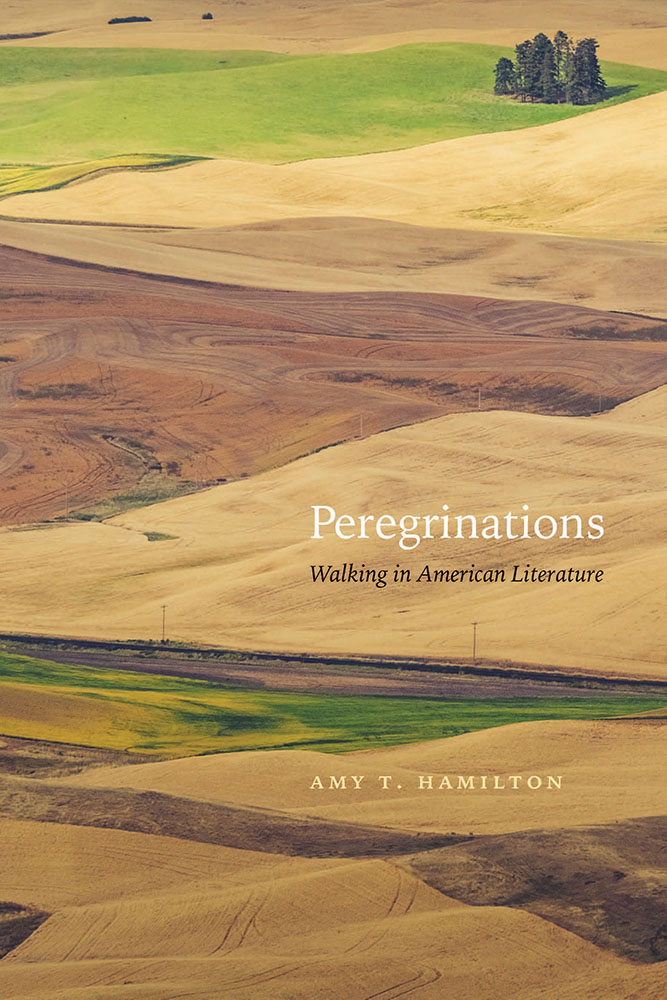 Peregrinate: To travel or wander around from place to place.

The land of the United States is defined by vast distances encouraging human movement and migration on a grand scale. Consequently, American stories are filled with descriptions of human bodies walking through the land.

In Peregrinations, Amy T. Hamilton examines stories told by and about Indigenous American, Euroamerican, and Mexican walkers. Walking as a central experience that ties these texts together—never simply a metaphor or allegory—offers storytellers and authors an elastic figure through which to engage diverse cultural practices and beliefs including Puritan and Catholic teachings, Diné and Anishinaabe oral traditions, Chicanx histories, and European literary traditions.

Hamilton argues that walking bodies alert readers to the ways the physical world—more-than-human animals, trees, rocks, wind, sunlight, and human bodies—has a hand in creating experience and meaning. Through material ecocriticism, a reading practice attentive to historical and ongoing oppressions, exclusions, and displacements, she reveals complex layerings of narrative and materiality in stories of walking human bodies.

This powerful and pioneering methodology for understanding place and identity, clarifies the wide variety of American stories about human relationships with the land and the ethical implications of the embeddedness of humans in the more-than-human world.
Author Bio
Amy T. Hamilton is associate professor of English at Northern Michigan University in Marquette, Michigan. She has written essays on Native American women writers, Euroamerican captivity narratives, and U.S. Southwest border literatures.
Reviews
“Peregrinations revises dated notions of walking in American literature as something associated largely with 19th century Euroamerican male-authored nonfiction. With material ecocriticism and feminism as backbone of her methodological approach, Hamilton intricately explores walking as it functions in Native American, Chicanx, and Euroamerican literatures. She reveals the reasons why walking should be understood as a process of bodies (human and nonhuman) moving not only across terrain, but through cross-currents of air, all the while impacting earth, and forming trails and paths that continue to be important both geographically and literarily in North America today. This incisive, beautifully-written book will be considered crucial to a growing and urgently important scholarship in American literary and material ecocritical studies.”
Joni Adamson, professor of English and director of the Environmental Humanities Initiative, Arizona State University
Hamilton shows how walking is the very basis of human agency. Though she briefly mentions Walt Whitman and Henry David Thoreau’s noted ideas on walking, Hamilton deconstructs the notion that walking is merely “a masculine tradition of conquest and domination of the American land,” by spotlighting several examples of Native American and Southwest border literatures that use walking as a means to interrogate place and identity.
KCET, Public Media Group of Southern California
Far from a crusade against whiteness and manliness, whatever those things are, Hamilton’s work brings to light the universality of walking as a deeply human experience and elevates underrepresented narratives to the level of the John-Smith-Davy-Crockett-Lewis-and-Clark American love affair. In an age of rocket ships, bullet trains, and nuclear submarines, it’s worth remembering that walking is the foundation of all our advancements.
Flyway: Journal of Writing & Environment
An important examination of what Hamilton calls the ‘intra- action’ between humans and the natural world. … In walking alongside the underrepresented voices in American literature, Hamilton’s Peregrinations invites us to read the many footprints storying the American landscape.
Western American Literature
© University of Nevada Press
Design by BDG